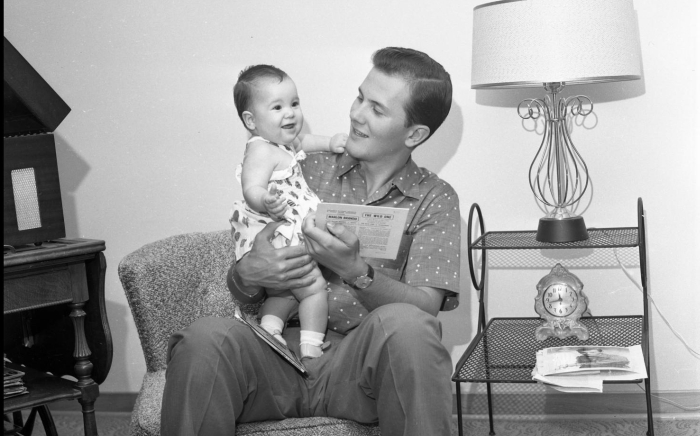 Pat Boone at the peak of his popularity

The late 1950s are the most difficult years to define in terms of “American Popular Song.” For the purposes of PopularSong.org, 1957 is a turning year based on the overwhelming influence of rock and roll. The chart above includes songs that should be defined as “rock,” and as such, will not be included in PopularSong.org charts post-1957. In other words, the chart above represents the broad spectrum of top-selling songs in the USA. Moving forward, PopularSong.org charts from 1958-1970 will more closely resemble “Adult Contemporary” charts.

As an example, here’s what the 1957 chart would look like if we removed what are considered purely “rock” songs:

If you compare and contrast the two different charts from 1957, you’ll better understand the PopularSong.org charts in general, and especially those from 1958-1970. You’ll see that All Shook Up is a little too rock and roll to maintain the number one spot, but not so rock and roll that it moves off the chart completely. Jailhouse Rock could arguably be considered part of the American Popular Song canon, but really it is rock and roll and as such is not on the second chart. Notice that Jerry Lee Lewis and Chuck Berry are off the chart completely. But as for Elvis and the Everly Brothers, they are a little harder to define, and certainly many of their songs fit the mold of popular song and not rock and roll. Certainly some are rock and roll.

Tastes were a bit, ah, “confused” in 1957. Probably one of the most dismal pop performances of all time was an extraordinarily huge hit — Tab Hunter’s “cover” of Sonny James’ Young Love. Notice in the second chart the James’ version is given its due credit, as it is the version that has lasted. James did spend a couple weeks atop the sales and airplay charts, but it was Tab Hunter’s dreadful version that dominated the Billboard charts for an incredible six weeks. What were people thinking in 1957.

Some of the great artists of the popular song era (1940-1953) were hanging on gamely in 1957, none more so than Jimmy Dorsey, who had a massive hit with So Rare recorded just prior to
his passing. Although performed by the Jimmy Dorsey Orchestra, history tells us that he didn’t actually play his saxophone on the recording. Either way, it is the last great gasp from the Big Band era.

Other pre-rock and roll artists who were still cranking out hits were Patti Page, Nat King Cole, and the Ames Brothers. Perry Como was still at the top of his game; he had a massive hit with Round and Round and would, incredibly, go on to even bigger hits in 1958. Frank Sinatra, now a major movie star, was back on top of the charts with a more polished sound. He was no longer “Bones,” now the “Chairman of the Board.” With hits like Witchcraft he would move from teen idol crooner-turned movie star to superstar.

Back to King Cole. Nat proved he could adapt to new sounds quite nicely with the rock and roll-influenced Send For Me. But like Sinatra, Como, Page, etc. Cole was aging — and the younger audiences were turning to younger crooners like Pat Boone and Sam Cooke. Cooke would die too soon as a result of his own lifestyle (sort of, but that’s another story) and Boone would be abandoned by the youth within a few years for not being “original” enough. Two stars who came on the scene in the late 1950s and would continue to see chart success into the 1970s were Andy Williams and Johnny Mathis. Mathis was a silky smooth balladeer; Williams had a range that is rarely equaled. Crooners? Sure. We wish there were more of them.

Notice the two listings for Butterfly on the chart. The best known version is, of course, Andy Williams’. But this was a cover record; Charlie Gracie hit the charts first and actually knocked Elvis out of the number one spot. Gracie’s sound was a little rougher, a little rockabilly, and he didn’t have the lasting commercial appeal of Williams. But Gracie has been revered through the years within the rockabilly and guitar rock scene, and he continues to perform and delight audiences. While one would expect Gracie to be bitter about Williams’ mainstream fame, he is most certainly not. Charlie appeared on Andy Williams’ TV show on a couple of occasions, and the two remain friends. A famous photo taken in 2003 in Harrisburg, PA after a Williams Christmas concert, shows Gracie holding a 45 RPM of Williams’ Butterfly and Williams holding a copy of Gracie’s. Both records were million sellers. Although their musical styles differ greatly, no question these two “Butterfly Guys” were both a class act.