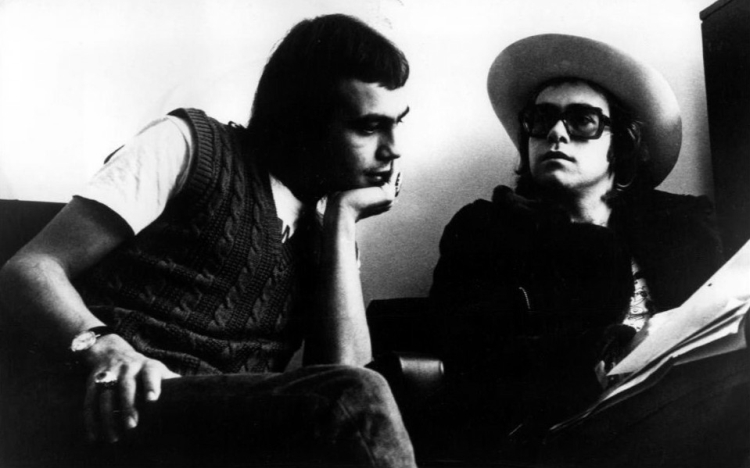 Upon examining the “British Invasion” here at PopularSong.org, the question of an appropriate songwriting contributor to the Great American Songbook was a hotly discussed topic. Should we opt for one of the historic greats, such as Clifford Gray or Billy Reid, or perhaps the obvious team of Lennon and McCartney?

When Reginald Dwight’s stage name was offered up, the immediate reaction was as expected: Absolutely not. It also betrays the age of most of the panel, who unfortunately conjure images of duck costumes, outrageous glasses, platform shoes, glittering pianos and ostrich feathers as soon as we are reminded that Reg is better known as Elton John.

Putting aside the glitter, glamour, and tabloid fare — and looking instead at the music — reveals a man who is one of the most important British composers in history. Consider if you will, a man named Reg Dwight, composer of classics such as “Your Song,” “Can You Feel The Love Tonight,” and “I Guess That’s Why They Call It the Blues.” Each are bonafide standards representing a different aspect of his songwriting, and representing different decades to boot.

Now consider the influential but less prominent classics, all written by the same composer: “Sorry Seems to Be The Hardest Word,” “Daniel,” and “Don’t Let The Sun Go Down on Me.” Not convinced yet? How about some forgotten gems: “Blue Eyes,” “Someone Saved My Life Tonight,” and “Honky Cat.” We use the term “forgotten gem” loosely here; these are examples of a few that are merely waiting to be covered and return to general popularity.

At this point we’ve only covered his contributions to popular song. A complete roster would include his works for film and musical theatre, and we won’t even delve into rock and roll, which some would (erroneously) call his strongest suit. Because PopularSong.org does not cover “rock” music, some of Elton’s classics on the cusp of rock vs. pop are difficult to address here. These include songs like “Levon,” “I’m Still Standing,” and believe it or not, “Crocodile Rock,” each of which could go either way.

Still not convinced? Consider that John’s musical composition known as “Candle In the Wind” is one of the largest selling recordings of all time. Originally conceived as a tribute to another artist better known by a pseudonym, the song for Marilyn Monroe was adapted by lyricist Bernie Taupin for Princess Diana, and became an international standard if ever there was one. At 37 million copies sold, the 1997 version ranks somewhere behind “White Christmas,” for which the total number is unknown.

Elton John has, in fact, penned few lyrics on his own. Taupin has provided the most notable and memorable lyrics for Elton’s music. Although often cryptic, the poetry Taupin provides creates imagery that makes the music memorable. The pair took some time off in the late 1970s after their initial flurry of hits, returning to their partnership in 1980. After that John continued to work with other lyricists, as Taupin colloborated on 3-4 songs per album. It is interesting to note that of Elton’s 1980s hits, the most memorable feature Taupin lyrics: “I’m Still Standing,” “I Guess That’s Why They Call It The Blues” and “Sad Songs (Say So Much).”

During the 1990s John worked with one of the legends of musical theatre, Tim Rice, to create five notable songs for The Lion King. One of these, “Hakuna Matata,” became and instant standard in the Great American Songbook. As evidence of John’s musical genius, one need only consider that virtually any lyric would’ve worked with this song; it is the melodic refrain that made it so memorable. And it’s light years removed from the duck costumes, platform shoes and other outrageousness of the 1970s.

As “Hakuna Matata” is good fun, his first classic “Your Song” is just plain good. It shot Elton to stardom on a wave of piano and strings, eschewing the hard guitar sounds that were so prevalent at the time. Considering the time and various faces of his music, it is virtually impossible to comprehend the variety contained in the Elton John catalog.

So the question remains, who is the most significant British composer of popular song?

With Gustav Holst limited to classical fare, the title probably comes down to a battle between Elton John and Andrew Lloyd Webber. John has a decided edge in terms of variety. Both have worked with lyricist Tim Rice on numbers for theatre and film, where we can clearly give Lloyd Webber the edge. Overall, it’s a toss-up. Perhaps the next time we feature British influence on American pop, we can take up the question of most significant lyricist — Rice vs. Taupin.