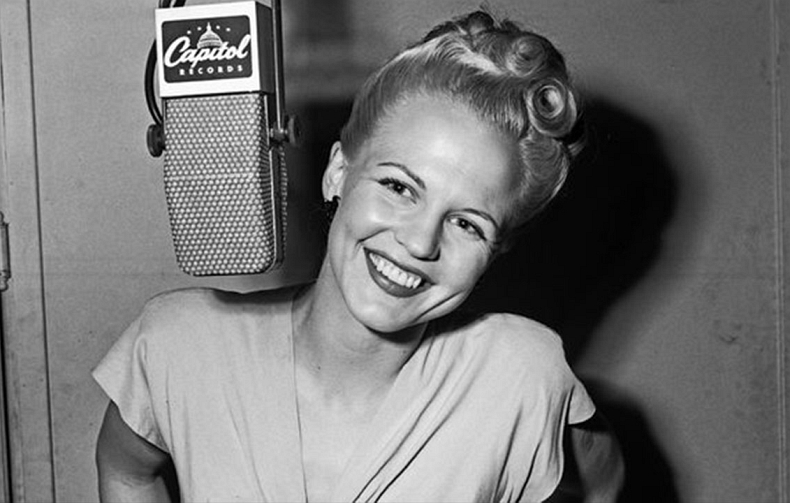 You know by now that Ms. Egstrom was, of course, Miss Peggy Lee, one of the most influential vocalists in the history of American Popular Song. But did you know that she was also an extremely capable songwriter? Let’s explore this often-overlooked side of Norma…err, Peggy Lee.

Obviously we can’t discuss Peggy Lee, composer, without getting the whole subject of Peggy Lee, performer, out of the way first. If we didn’t, it would loom over the discussion like a smoldering fever.

So, a quick paragraph about her vocals. Peggy Lee was blessed with a full, powerful voice. She began her career with it, until a nightclub date where she found herself competing against clinking glasses and party chit chat. She decided to turn the volume down so the audience would have to quiet down to hear her. That’s how she discovered her unique style. Now, if you’ll agree to put the vocal skills aside for now, Miss Peggy Lee felt that she was terribly underrated as a songwriter. She wished to be better known for that facet of her talent, so without further ado, we present our featured songwriter this month, Peggy Lee.

As a top female vocalist with one of the most successful swing bands in the nation, Lee would not be expected to be a lyricist in the mid-1940s. Female songwriters were a rarity, and female songwriters who were also successful vocalists in the pop field was even more of a rarity — there weren’t any. Recording for Johnny Mercer’s new Capitol Records label, Lee was given free reign, and Mercer is said to have encouraged her to pursue songwriting.

Peggy’s first and perhaps most notable collaborator was husband Dave Barbour, a guitarist she fell in love with while both were employed by Benny Goodman. Barbour wrote catchy melodies, but it was often Lee’s extremely bright lyrics that made the songs work. Their first big hit together was “I Don’t Know Enough About You” in 1946, which went to #7 on the pop charts, and was likely #1 in a few regional markets.

Their next solid hit came early in 1947, “It’s a Good Day,” which peaked at #16. Both of these early collaborations became semi-standards. Lee would quickly learn the difference between artist royalties for a single records, and composer royalties for a song released by multiple artists. Thus encouraged, she set to work perfecting her craft, and soon came up with “Mañana.” Lee is routinely credited for her ability to phrase a song in a smokey, sexy style. It’s interesting to note then that her only composition to reach the top spot was this light, comic song, which hit #1 in 1948. Some Latinos bristled at the lyrics, but most thoroughly enjoyed the playful humor. “Mañana” remained a frequently played hit on adult contemporary and easy listening stations well into the late 1960s.

Through the 1950s and 1960s Lee pursued her songwriting role with a number of different collaborators. The list is like a “who’s who” of the music business, including the likes of Harold Arlen, Sonny Burke, Cy Coleman, Gene DiNovi, Duke Ellington, and Quincy Jones.

One of the songs Lee wrote that unfortunately has not withstood the test of time is “Johnny Guitar,” with music composed by Victor Young. The song was penned for a Joan Crawford film of the same name in 1954 and sold well at the time.

A year later, Lee gained further fame as the voice of Darling in the Disney animated film, Lady and the Tramp. The interesting thing about this is that she also wrote the lyrics for most of the songs, notably the popular “He’s A Tramp” and “The Siamese Cat Song.” Decades later Lee successfully sued for royalties on videotape sales for this beloved film. Video cassette technology didn’t exist in 1955, and Lee’s contract had no clauses for unforseen future distribution. She won the case, a landmark for writers.

After Tramp, Peggy Lee sort of gravitated to writing for movie themes. One of her better known successes was “The Heart Is a Lonely Hunter,” written with Dave Grusin. Her intelligent sense of humor, first seen in “Mañana,” surfaced again some two decades later. Lee was the lyricist for the unlikely cold war comedy, The Russians are Coming, The Russians are Coming, which starred Carl Reiner and Alan Arkin.

As for Lee’s best known song, “Fever,” she re-worked and re-wrote many of the lyrics, but not enough to claim a writing credit. That’s a shame, because the reference to “Captain Smith and Pocahontas” and some of her other phrases completely energize the song.

In the twilight of her career, Peggy Lee released a triumphant album called “There’ll Be Another Spring: The Peggy Lee Songbook.” This was a collection of songs she had written, plus the ubiquitous “Fever.” The album caused the pundits to give her songwriting talent a second look, and Peggy Lee finally began to receive the accolades she so richly deserved for her lyrics.