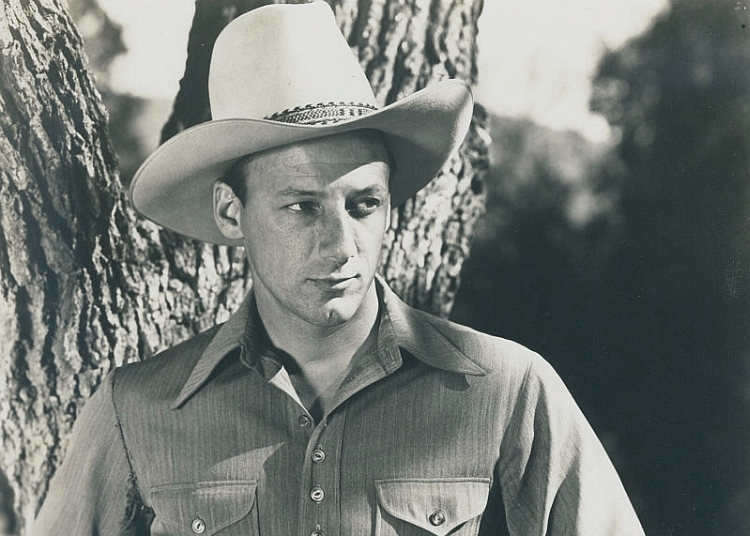 With few exceptions, country and western music is sort of the red-headed stepchild in the family of American Popular Song. It is seldom given the respect it deserves. Among the jazz-oriented fans of traditional pop, country/western is akin to Rodney Dangerfield; virtually no respect whatsoever. For this month’s featured songwriter, we turn to one of the few western composers whose tunes were embraced and are firmly engraved in the Great American Songbook, the one and only Bob Nolan.

Nolan was born as Clarence Robert Nobles in Winnipeg, Canada in 1908, and moved to Arizona as a teenager. His father Harry was a professional singer using the surname Nolan, so young Clarence followed suit. He worked in a variety of western music shows until 1933, when he formed The Sons of the Pioneers with Leonard Slye (Roy Rogers) and Tim Spencer. Nolan performed as a vocalist with the Pioneers, although like Rogers, he was perhaps better known as a western movie star at the time.

As a founding member of The Sons of the Pioneers, we could just as easily recognize Bob Nolan in our “Artist of the Month” category. The decision was made based on the general agreement that Nolan’s compositions have more lasting significance than his recordings. It led to comparisons to another Canadian-born singer/songwriter, Gordon Lightfoot, who we then selected for the “Artist” category.

Two of Nolan’s compositions define the western influence in American Popular Song. To better understand why, it helps to understand the circumstances during the 1940s, in popular song and pop culture in general.

The foremost thing to understand is that the “old west” were the 1940s what the “fabulous fifties” are today. The old west had figures like Wyatt Earp and Buffalo Bill — both of whom died about two decades earlier — and the fabulous fifties had Elvis Presley and Ricky Nelson, ditto today. We look back fondly on the 1950s as a simpler time that we celebrate in films and Broadway shows. This is exactly how America looked back at the “old west” during the 1940s.

Prior to the rise of Western movies, country/western music made very few inroads into American Popular Song. With the advent of western-themed serials during the 1930s, the sound and styles began to get noticed. During the 1940s the worlds of pop and country music didn’t exactly blur, but they did “borrow” and influence each other. From the country side, the pop world embraced Eddy Arnold as one of the first “crossover” artists. While artists like Hank Williams found most of their records covered by pop stars, Arnold was much smoother in style and appearance, and one of the few who was regularly played on mainstream radio. Western style found its way into pop songs and musicals in general. Recordings like Bing Crosby’s “Sioux City Sue” had western themes, but were unquestionably pop songs. Eventually a number of pop artists recorded western songs; Vaughn Monroe, Dinah Shore and Frankie Laine come immediately to mind.

The exchange worked both ways, as the western sound was heavily influenced by pop style in the 1940s. Bob Wills is probably the most overt example of an artist who embraced a pop influence; he blended western music with the “swing” sounds that were sweeping the country. Eddy Arnold’s music, as mentioned above, was a country sound softened by pop influences; Rex Allen and Tex Ritter were other western recording stars who evoked a more popular sound.

Nolan, Slye and Spencer formed the Sons of the Pioneers in 1933, and quickly moved into film. Nolan made his debut as a vocalist in 1934, and went on to appear or sing in some 90 movies over the years. Prior to finding fame, Nolan allegedly wrote a song called “Tumbling Tumble Leaves,” which was supposedly modified to the classic “Tumbling Tumbleweeds” in 1934. “Tumbling Tumbleweeds” was selected for a Gene Autry film a year later, the name of which was changed to capitalize on the hit recording. The film starred Autry and Smiley Burnett, along with the ultimate western sidekick, Gabby Hayes.

After the Sons of the Pioneers recording, Gene Autry recorded Tumbleweeds, and it didn’t take long for the tune to become a standard. Crosby, Monroe, Laine, Kate Smith, and a host of other mainstream artists followed. It was recorded by country artists as well, including Williams and Hank Snow. Later pop recordings followed by Perry Como, Jo Stafford, and Patti Page.

The song was first and foremost a hit for The Sons in 1934. It charted for Autry in 1935, and then charted in a big way for Bing Crosby in 1940 — reaching #1 in quite a few markets. Kate Smith had a hit around the same time, and then Roy Rogers charted it as a solo effort in 1943. The Sons re-recorded Tumbleweeds in 1944, and since history tends to repeat itself, Autry re-recorded it in 1945. In each case, the song sold extremely well. If there’s any question that Nolan’s composition fits the description of “pop standard,” consider that it was quite capably recorded by Diana Ross and the Supremes at the height of the Motown era in 1965!

The Sons of the Pioneers adopted “Tumbling Tumbleweeds” as their theme song, and it was featured on the group’s 1940s radio program Lucky U Ranch. This also contributed to cementing the song as a standard.

Nolan’s next hit composition was released in 1936, the classic “Cool Water.” While Tumbleweeds celebrates the image of a carefree cowboy, “Cool Water” does the opposite. Focusing on the vastness and mirages of the desert, the lyric is virtually without hope. The music is far more complex than almost every other western song of the era. With the right arrangement, “Cool Water” is downright Gershwin-esque.

The chart history of the song is virtually impossible to track, simply because so many versions charted. If anything, “Cool Water” is more entrenched as a standard than even “Tumbleweeds.” We know of chart activity by Dude Martin in 1936, and Bing Crosby in 1940-41. There was also chart action by The Sons Of The Pioneers in 1941, and then by “Bob Nolan & The Sons of the Pioneers” in 1945. A recording by Jimmy Wakely & The Riders Of The Purple Sage from the film Saddle Serenade charted in 1945, and then Bob Nolan & The Sons of the Pioneers were on the big screen with a version in 1946. Wesley Tuttle charted in 1947. The ultimate recording was released in 1948, when Vaughn Monroe — with The Sons Of The Pioneers — took the song into the top ten nationwide. This of course spawned a plethora of cover recordings, including versions by The Mills Brothers, Frankie Laine, Kate Smith, and Rex Allen. Gene Autry recorded the song in 1950, and then Billy May put a version on the charts in 1953.

The song was finally given a rest for a few years, until Polly Bergen brought it back in 1958. That led to a few other recordings, and in 1959 Marty Robbins started the ball rolling in a big way when he included “Cool Water” on his classic album, Gunfighter Ballads and Trail Songs in 1959. Robbins’ LP was one of the last great western-themed records; some consider it the ultimate collection of western recordings by a single artist. Believe it or not, as of March 2009 it is the number 3 best-seller in Amazon’s “Cowboy” category, and the number 5 best-seller in Amazon’s classic country “Nashville Sound” category. It was released fifty years ago.

In any case, Robbins’ recording of “Cool Water” wasn’t released as a single, which makes its impact even more impressive. It spawned a series of recordings by Johnnie Ray, Eddy Arnold, Lorne Greene, Tex Ritter, Slim Whitman, Tennessee Ernie Ford, The Norman Luboff Choir, and a re-recording by Frankie Laine. But most importantly, the success of Robbins’ album prompted the RCA-Victor label to blow the dust off its recording contract with one of its forgotten artists, ahem, The Sons of the Pioneers.

The now-revised lineup of The Sons was brought into the studio to lay down new versions of their classic cowboy songs. Done without the lead of a Vaughn Monroe or Roy Rogers, the resulting 1959 LP Cool Water is easily the best choral document of the western era in pop music. Although not as highly regarded artistically as Marty Robbins’ album, the record continues to sell, also surprisingly well.

Nolan composed hundreds of western oriented songs in his lifetime, but none come close to the importance of “Tumbling Tumbleweeds” or “Cool Water.” Echos of Nolan’s songwriting style — a libretto that is worthy of Broadway, music worthy of Gershwin, all in a western package — can be heard throughout pop music in the years since. His influence is heard in songs like “Ghost Riders in the Sky” and certainly Marty Robbins’ own “El Paso.”

So despite the occasional lack of respect for western music in the pop arena, we’re pleased to celebrate the work and influence of songwriter Bob Nolan, Canadian-American cowboy.