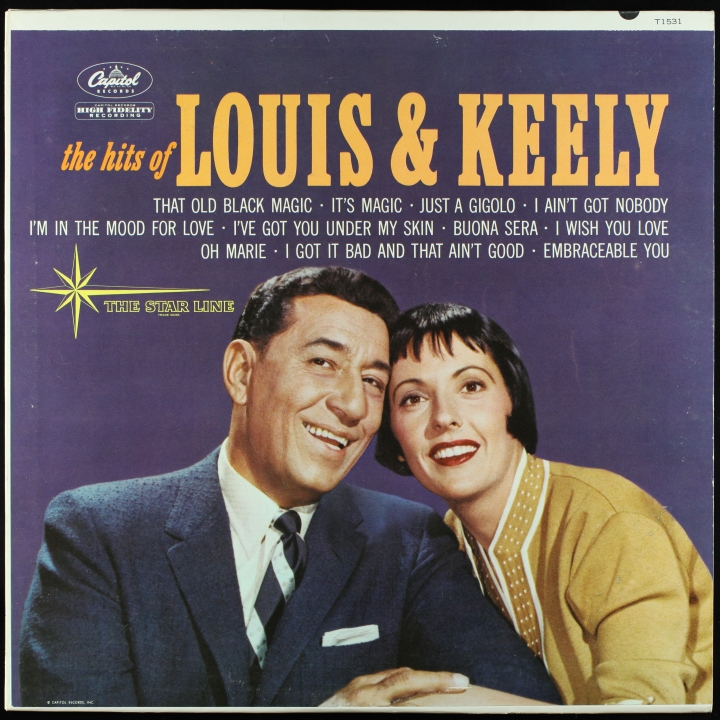 With music by Harold Arlen and lyrics by Johnny Mercer, “That Old Black Magic” immediately caught Glenn Miller’s attention in late 1942. Ever the perfectionist, Miller worked the song until he had an exacting performance from his band. Using a vocal by Skip Nelson, with backing from the Modernaires, the song shot quickly to number one after it was released in mid 1943. It is generally agreed that this was Miller’s last “official” number one — although as we discuss elsewhere on this website, there is plenty of wiggle room when you try to define a number one song prior to the 1950s.

Like virtually every hit song of the era, competing record companies rushed out cover versions. The first was Charlie Barnet’s on the Decca label, featuring a vocal by Frances Wayne. This was mildly successful until a more compelling female vocal version was released by the Freddie Slack Orchestra featuring Margaret Whiting. This song was a milestone in Whiting’s career in that it launched her from being Johnny Mercer’s radio jobber to Mercer’s female star at Capitol. Additional covers were released in 1943, but have largely been forgotten.

The song returned to the charts with a rhythm and blues treatment in 1947. It was recorded by Billy Daniels, a singer who would eventually be known as “That Old Black Magic Man” for his reliance on the tune. Frank Sinatra made some noise during the same year when he recorded the song as the usual ballad, and it became a song he would return to throughout his career. Daniels’ success stimulated another R & B version by Tiny Grimes on the Atlantic label in 1948, but this received little or no national attention.

Daniels, not to be denied “his” song, released another recording on Mercury records in 1950. This improved recording struck a chord with the youth market, who were longing for something different than the music their parents listened to. Although rock and roll was still a few years off, teens were surreptitiously tuning in to black radio stations, which were playing the raw forerunners to rock and roll.

The song idled for a few years, then returned to the charts in 1955 with a new Decca offering from Sammy Davis Jr. This version peaked at a respectable #16, and it moved firmly into the category of “pop standard.” It brought about another flurry of covers, including Ella Fitzgerald and Johnny Mathis. It was during this era that Marilyn Monroe sang “That Old Black Magic” in Bus Stop, which didn’t hurt.

Still, the best was yet to come for “That Old Black Magic.”

Louis Prima was a B-list bandleader who hired a half-Cherokee beauty named Keely Smith as his feature vocalist in 1949. The pair married, and began raising a family just as the disintegration of the big band sound finally caught up to Prima. Desperate for money, Prima signed on as a lounge act at the fledgling Sahara Casino in Las Vegas. The still-new room was cramped, and had already gained a reputation as a terrible venue. Prima’s theatrical antics and wacky repartee with Smith and saxophonist Sam Butera was just what the room needed, and the act took off.

Working through the night, Prima moved through the available jazz standards like a buzz-saw. His duets with Smith were particularly well-received, and songs like “That Old Black Magic” built the act. By 1957 the Prima and Smith lounge act was outdrawing most of the big showrooms in Vegas. Mercer signed the resurgent trumpeter to the Capitol label, and can’t be blamed for releasing his own song as a single. The sound appealled not only to adults who remembered the tune, but also to teenagers who appreciated Prima’s energy. Thus in 1958 it was a hit yet again — and although it didn’t reach the top ten, it lingered on the charts and on radio. The still-new NARAS organization presented the duo with a Grammy Award for their performance a year later.

Music fans can be excused for thinking that “Old Black Magic” dates from 1958. In addition to the Prima/Smith version, Doris Day made a landmark recording of the song on an album, Hooray for Hollywood Part 2. This collection was one of the best album offerings of standards to date, and Day’s performance of “That Old Black Magic” led many to believe she had recorded it during the 1940s. Because listeners often confused or accepted Day’s “modern” version over Whiting’s quasi-original, many referred to the Prima/Smith recording as “a remake of the old Doris Day song.”

Sinatra jumped on “Magic” again in 1961, eschewing the ballad format for a more typical arrangement on (surprise) Johnny Mercer’s Capitol label. During the same year, teen heartthrob Bobby Rydell released a rendition that climbed into the top twenty on the pop charts, marking the third consecutive decade that the song charted.

The song continues to find its way into pop culture, for example, in 1997 a recording by Kevin Spacey was used in the film soundtrack for Midnight in the Garden of Good and Evil. A critically acclaimed version by cajun artist Dr. John was released in 2006, and it continues to be performed in nightclubs across the country. So don’t be surprised next time you hear a new version of Mr. Arlen’s and Mr. Mercer’s little tune.

Editor’s note:  Rod Stewart released his version of “That Old Black Magic” two years after the publication of this article, which is why it is not mentioned in the original text.  The beat goes on…